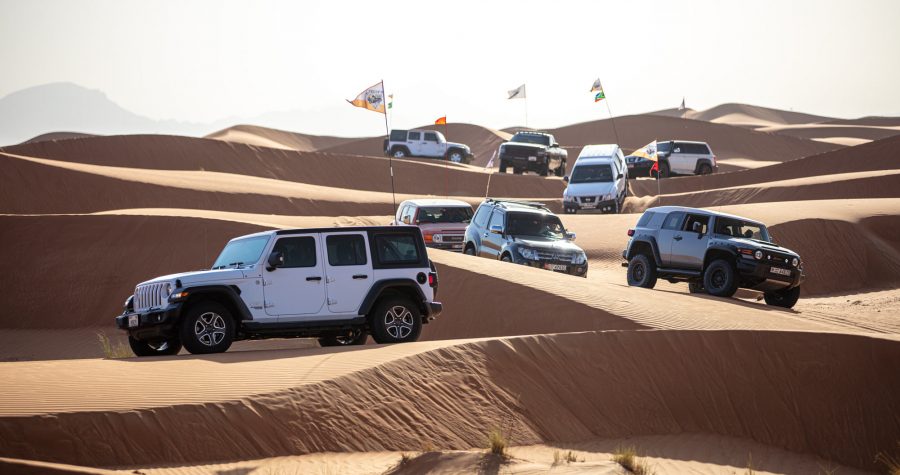 Junior Level 6 is one of those rides we’d rather forget.

This was the second attempt we expected to be better than the first but unfortunately it turned out the other way around.

We first started with apologies for the late arrival and of course the delay.

We had the first second try on the first dune and so it continued until the very end of the trip. I personally stopped counting after the 30th second try which completely killed even the last glimmer of today’s plan. I no longer had a solution because every dune regardless of characteristics became a second try.

On the first climb we had our first tricky stuck. That stuck helped us get back to basic and explain the mistakes. Two vehicles after the same thing, same place, different vehicle. We just “weren’t there.” Second tryes and recoveries lasted indefinitely. When everything is added and subtracted, we were more concerned with solving second try situations than we were driving.

Today’s convoy was black and white in color and flavor. 60% chocolate and 40% something in between.

What we have realized is that some members do not take seriously what we explain to them from the beginning of their careers with us. Some questions have surfaced that are the basis of all foundations. It is sad that at such a high Junior level we have to explain and answer the questions we have answered several times in the Prospect level. It’s not serious and it’s a slap in the face to us who are trying to pass on our knowledge.

Standard formation worked well, but the trip discipline was pretty bad. Every time the vehicles stopped, some drivers immediately used it as an opportunity to stretch their legs, take photos and the like. As if they were a tourist there rather than coming to training. Some drivers even had a flip-flop on their feet. The leading team was not at the peak of the task because such situations during training are unacceptable.

The radio was almost unusable. Once I even had to stop the convoy and wait to give instructions to the second lead.

I hope that debriefing with the leading team we had after the ride will help to ensure that situations like this never happen again.

And in the end, this trip was feasible for 60% of the convoy while for the remaining 40% it was simply too much of a bite. We will have to analyze today’s driving and see what we can improve in order to speed up the flow and improve training. We cannot allow a convoy of the same level to be so different and divided into two parts.

In the meantime, I don’t think this area will be available to the Juniors anymore. But a detailed analysis follows first.

At the end of the day, there were a few good drivers who showed their reliability. Others must work on discipline and take seriously what we are trying to teach them. Offroading is fun but we are not invulnerable. Keep this in mind the next time you get your vehicle out on the sand.

I’m challenging all participants of this trip (Juniors) to make honest review of their teammates who was driving in front of them. I’m also challenging you to give honest ratting for the same team member and his performance/behaviour on todays trip.

Amazing shot , 🤩 bumpy ride to take the learnings from and then archive quickly to move forward 🚗💨, see you all soon back in the sand

I’m so sorry to hear this from you Marko, you’re 100% right – this drive was not as expected. At the beginning I got excited because of the second take of this drive lvl 6 but finally it was not as supposed to be. You invest time and efforts to train and build real off-roaders – which we totally respect and at the end things do not get at the level it should be. Let me promise you that next drive it will the way you like and you will have to rate us at least 4 stars ⭐️ –… Read more »

Because I couldn’t attend the first Jr Lvl 6 drive I was looking forward to it. When I saw my name in the last position of the convoy I was a bit worried, because I had some issues in the past to follow the messy softy tracks when in the back. Anyway, I took the challenge and It was very nice to feel and see how much I have improved, having momentum and confidence issues, I was surprised to see myself taking the challenges and making it. I got a tricky stuck that was perfectly handled by Sujith and made… Read more »

Last edited 23 days ago by lucas.torres
4

Today was quite frustrating to say the least. It felt as if it was a junior lvl 1 group trying to drive. The amount of second tries on tiny little dunes blew my mind. Have we learnt nothing from Lvl 1,2 and 3??? I’ve been working very hard on keeping a perfect following distance but it was made impossible due to the extreme inconsistent driving from the two cars in front of me. I drop my head in shame at our performance today, Marko, Sven and Sujith donate their time free of charge for us and we pis on it… Read more »

To anyone still reading this, Nag reached out to me this morning and we had a talk about yesterdays drive. We talked about how our driving was impacted by drivers in front and behind us and how we need to adjust our ourselves accordingly. What I am taking away from yesterday drive: After the drive myself and another fella had a chat with the sweeper about what to do in situations where you have a driver in front of you with a different driving style than your own and keeping the correct following distance. He advised that you should focus… Read more »

Hi  Johann please next time, for any concerns related to drive consult team leader rather than supporting team. In DF every member has his role, Supporting team is there for supporting trip in terms of safety, recovery, clear communication, alignments etc. but not giving you advices as mentioned. Team leaders and above are people who can help you with any concerns. Make sure that you address your questions and concerns always to most senior in the group starting from the team leader to above. Otherwise you will easily get confused if you take personal opinion for granted. We will talk… Read more »

So noted Marko. Sorry about that.

Drive was finished safely, but start /end times were slipped a bit due to several reasons. We could cover very less miles and the real steering time is too less. Most of the time spent on struck & recoveries which was not expected. Individually everyone may be up to the mark but team performance to be improved. As every drive is occupied with different people, it takes some time to synchronize with each other. Personally I struggled a bit to understand the drive style of the car in front of me. I’m sure Johan might have noticed it. Reason looks… Read more »

The fellas above me articulated already very well. To make it short I understand Marko’s disappointement and still grateful with the leading team for their free time with noobs like us. I started wrong today. The tricky stuck was a beginner mistake due to a lack of rpm reading. And there is always room to improve. Then some few off and back track during the drive. On a more a general level and on supposed masterized technics and skills during the former Jr levels (2 prospects drives, 6+3 jr lvl drives) please allow me to be more straight forward :… Read more »

Last edited 23 days ago by Victor
3

Although I have not been on the sand for a few months I (enviously) read the trip reports because they contain some excellent tips and advice, especially from Johann. This particular report was brutal! From my limited experience, a convoy is a team that is only as good as it’s weakest member. I also know that not all members are equal. It could be the vehicle (Talal’s F150 for example), a lack of understanding of the vehicle, fear of damaging said vehicle, lack of confidence or, simply not being a good driver. I did not sign up for a Junior… Read more »

I have not much to add to everyone’s comments already and Marko’s trip report, everyone is being frustrated and disappointed is least to say. Close to the end of the trip I heard someone shouting “it’s a mess” in the radio. I wouldn’t comment on skill set of a car in front of me simply because I have a lot to learn myself, trip leaders are always accurate on their feedback so I’ll leave it to them. My only disappointment today is that how fragile our teamwork is. As a convoy, we need to operate as one mechanism and not… Read more »

hi fellas, sorry one more time for my delay and my gps issue. It won’t happen again. It is sad to read the bad performance we had, I personally accept and recognise my driving was not as expected. I had a bad starting and it marked my day. I agree with all of you and I appreciate your honest feedback. This wasn’t my best ride for sure and I couldn’t manage properly my car, I am completely open to receive advising and improve. about Fouad in front of me: I cannot compare his driving to mine, he did much better… Read more »