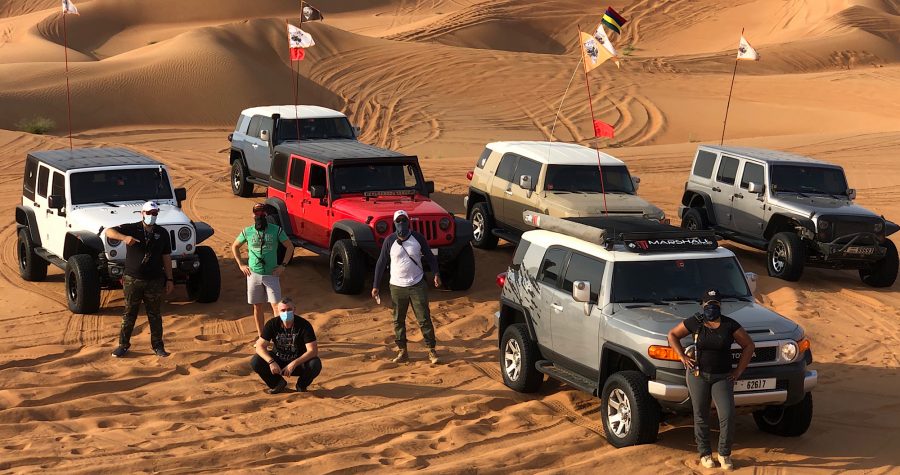 Hooray, we finally got to finish the trip that we started three weeks ago, in grand style.

Today’s convoy was small, due to the rather late posting of the drive. The agility of a small convoy was clearly visible during the smooth and well paced warm up between Nazwa and Big Red.

At Big Red the terrain changed drastically and the convoy had to change their driving style to overcome the steep climbs and soft sand. Initially, lack of sufficient safety distance for the given terrain and delayed communication resulted in a multi-car second try, but this was promptly addressed by our sweeper  and we got the show on the road again.

The last leg of the drive was where the convoy really got their groove on, as we crested our way to Pink Rock and exited the desert. Nobody seemed to mind the slightly earlier than planned exit because the smooth flow meant that the convoy covered a lot of ground with intense focus…leaving our Fellas pretty wiped out by the time they hit the tarmac.

This trip highlighted the importance of maintaining dynamic and situational safety distance. It is important that we adjust our safety distance according to the difficulty level of the terrain. At Big Red, despite specifically announcing that the safety distance had to be doubled, we still had a situation where three cars had  second tries in a bowl, at the same time. At this stage in the game our reflexes need to be sharper. When the person in front is slowing down in a difficult area and it does not seem likely that he will be able to complete the challenge you need to have a safe exit plan. You will certainly end up having a second try, but you will be safely away from the vehicle in front of you.

Thanks to my second lead, Rathica,  for making it so easy to lead and special thanks to Marko for volunteering to sweep on this trip, without whom there would literally have been no drive today.

If there was 6 stars to rate any trip it would be this one.

Points well made Preggy and acknowledged, hopefully will be improved next drive (s).

Thank you Preggy for the trip lead and great lines, thank you Rathica for the excellent Second Lead and thanks, big thanks to Marko for volunteering to sweap, you really made our weekend.

Thanks to the amazing Massimo and Zoubier, today it was dream team.

Last edited 16 days ago by Hussam
3

This is the moment when complete training comes together. We now understand better everything we have said from the very beginning. All those techniques and words get more meaning. This is a serious sport that requires attention and concentration at all levels, at all the time. Starting from the leader to the weakest link. There are no exceptions. Common sense, mutual understanding and training bring satisfaction and make us proud and honored to be part of such a team. That is what everyone felt today. Every new day is an opportunity for learning and improvement. Be the best in the… Read more »

﻿⭐﻿﻿⭐﻿ 2 more stars because this was definitely a more than 5-star trip. very well planned trip in terms of track lines. pace was on the higher side – which I enjoyed. the “stay awake” and other encouragement messages kept us alive, 110% focused and pushed us to outperform. this trip was mentally pleasing in terms of positive energy and teamwork. trusting your team mate is crucial and with such a nice team, I feel safe. I’m sure  Hussam and  Massimo will agree. Big thanks to  Marko who saved saved the trip literally hours before. Preggy ﻿👍﻿﻿👍﻿ for the planning… Read more »

Last edited 15 days ago by Zoubeir
3

Roses are red Violets are blue This was an awesome trip And i shared it with you 😂 Last minute trip, last minute confirmation but oh boy we had some fun! Small convoy so we had a high pace and compact distance made good memories. So glad to be batch mates with Zoubeir and Hussam! We grew our skills together and it was really fun to see how well oiled the DF machine was! Timely advise from the leaders and off we were conquering yet another crest waiving and dancing our way to the end. I only recall one stuck… Read more »

I don’t think there was any recovery 😂 only second tries of my weak memory helps, but yeah mate, definitely this was a nice trip. See you next one 😎